During the first days of July 2012, Andrews Air Conditioning Business Development Manager, Sam Law, completed what must be one of the toughest physical tests in the UK – the Four Peaks Challenge.

In just 47 hours, 57 minutes and 26 seconds he and his team-mates climbed and descended the mountains of Ben Nevis in Scotland, Helvellyn in England, Snowdon in Wales and Carrantuohill in Ireland. In all they climbed a total height of almost 14,500ft and drove nearly 2000miles.

To make all the pain worthwhile, the team gathered sponsorship totalling an amazing £12,000 in aid of the Wooden Spoon Society, the Children’s Charity of UK Rugby, whose Patron is ex England Captain and British Lion, Phil Vickery.

‘’This is one of the most physically and mentally draining things I have done’’, Sam explained at the end of the event, ‘It’s similar to selling air conditioning during our lovely British summer!’’

Congratulations to Sam and his fellow adventurers from everyone at Andrews Air Conditioning. 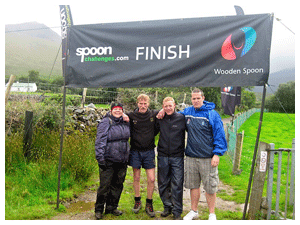