As worldwide regulations curb the use of environmentally damaging chemicals, the air conditioning industry continues to innovate in the field of refrigerants. One example is the refrigerant Difluoromethane, also known as R32. 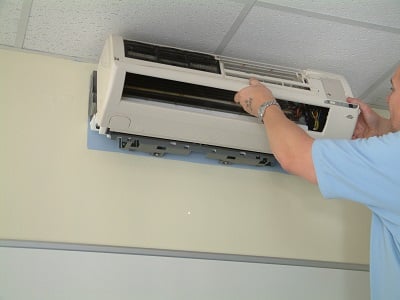 Replacement of Refrigerant should always be undertaken by a Specialist Contractor

R32 is a single-component refrigerant, and although it is listed as “mildly flammable”, it has zero Ozone-depleting potential (ODP) and a much lower global warming potential (GWP) than R410A, one of the most commonly used air conditioning refrigerants throughout Europe and North America. R410A’s GWP is at 2088, whilst R32’s is significantly lower at 675.

R32 is a component of the R410A blend but its mild flammability encouraged the development of R410A which, due to its formulation, is non-flammable. In fact R32’s flammability is relatively low, with a burning velocity of less than 0.1m/s, generally too slow to cause an explosion or horizontal flame propagation. Furthermore, the volumes of refrigerant used in most air conditioning systems are small, meaning that a refrigerant leak is unlikely to present a danger.

Before R32 can be rolled out across Europe, Daikin says, “all aspects of the product life cycle” must be examined, such as “training for installers and availability of R32”, as well as storage and transportation to ensure the continued safety of the public. Once these issues have been addressed, there may well be the potential for safe and widespread use of R32 refrigerant within the European market.

Andy Whiteley, Divisional Director of Andrews Air Conditioning Services noted, ‘We are following these developments closely and, as independent specialists, will be explaining the opportunities they present to our clients to reduce their environmental impact in the future’.