Over the final weekend in June 2013, whilst most of the country was watching Wimbledon or Glastonbury, two intrepid teams from Alton Rugby Club in Hampshire set out on one of the most arduous hill-climbing events in the UK. One team included Sam Law, Southern Business Development Manager for Andrews Air Conditioning, and their objective was to climb the 4 highest peaks in Scotland, England, Wales & Northern Ireland one after the other. And, as if that wasn’t tough enough, they aimed to complete all four ascents, descents and travel between the mountains, within 48 hours. 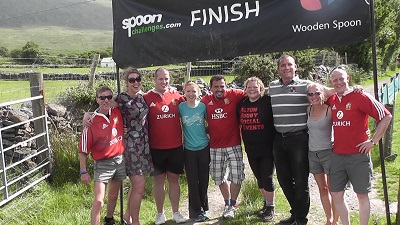 In an astonishing feat of stamina, tenacity and, well, stupidity, they successfully completed their challenge, raising a fantastic £8500 for their chosen charity, the Wooden Spoon Society. Along the way they also won 3 special awards for the ‘Fastest Ladies Team’, the ‘Drivers’ Climbing Challenge’ and ‘Best Decorated Vehicle’.

The Wooden Spoon Society is the Rugby Union children’s charity which helps mentally and physically disabled children by providing funds for a wide variety of capital projects. Everyone at Alton Rugby Club and Andrews Air Conditioning is hugely proud of the team’s achievement, and we send them our many congratulations. For more information on the charity’s great work, visit www.woodenspoon.com.